London Masonic Centre gets a Facelift! 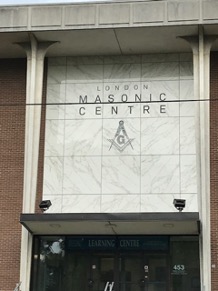 The President of the London Masonic Centre, R.W. Bro. Ray Charles noted that some of the old marble panels weighed up to 700 pounds. The new fascia is a man-made material called ceramitix that has a marble finish, is much lighter and more durable. The section of the original marble displaying the Square and Compasses installed in 1964 has been preserved.